The law of the canals

Lecture at the Collège de France in Paris on Saturday the 16th of November, 1996

to the members of the Association Française de Strabologie interested in Posture.

In order to check that this hypothesis is also true concerning visual and vestibular afferences, we could take into account the very particular anatomy and the physiology of the semi-circular canals. Each canal, indeed, specifically perceives angular accelerations depending on the plane, the way and the direction of the acceleration relatively to the plane of that canal (Ross, 1936; Löwenstein & Sand, 1940; Adrian, 1943; Zotterman, 1943; Estes et al., 1975; Banks et al., 1975.a). Thus, an angular acceleration parallel to the plane of the right posterior canal and going backwards and right will involve the appearance of stimulating afferences only from the cupula of that canal (fig. 1). Now, in the absence of movements of the eyeballs, the head movements provoked by those angular accelerations are accompanied on the retina by a shift of the environment image along an ocular meridian parallel to the vector of that angular acceleration. If, during the ontogenesis, the perception of space is not built independently for the visual canal and for the vestibular canal, signs of this privileged relation between the planes of the semi-circular canals and the directions of the visual space have to be found. 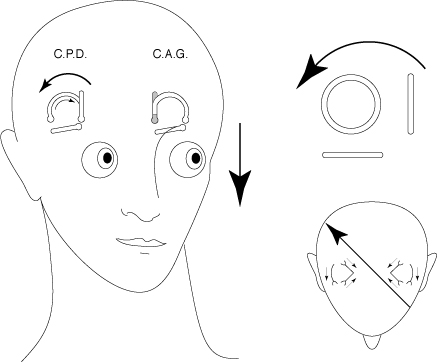 Approximately knowing the planes of the semi-circular canals, it is possible to determine geometrically those ocular meridians «corresponding» to the planes of the semi-circular canals. The plane of the left posterior canal, for instance, makes an angle of around 71° relatively to the horizontal plane of the stereotaxic system of Reid (q1 on figure 2) and an angle of around 55° relatively to the sagittal plane of the same system (q2 on figure 2) (Blanks et al., 1975.b). The section of the eyeball by a plane parallel to the plane of that canal and going through the centre of the eyeball, corresponds to the meridian along which the environment image shifts during movements with accelerations stimulating the left posterior canal.
.     We can notice that the same retinal shift is provoked by a rotation of the eyeball around an axis perpendicular to that plane.

FIG. 2 - Descriptive study of the section of an eyeball by a plane parallel to the plane of the left posterior canal and going through the centre of the eye.
q1= 55°, q2 = 71° relatively to the stereotaxic planes of Reid (Blanks et al., 1975.b)

That last remark points to a privileged relation between each semi-circular canal and one or several oculomotor muscles that, when close to the primary position, provoke a rotation around an axis perpendicular to their plane. That privileged relation has actually already been described by various authors (Lorente de No, 1932; Szentagothai, 1950; Cohen et al., 1964; Ito et al., 1976).

hypothesis
.     A prism deviates the visual space in a single direction that can be identified thanks to the position of the base of the prism. If, during the ontogenesis, the perception of space has been built coherently for the visual and the vestibular sensory canals, certain relation between the planes of the canals and the position of the base of the prism has to be found. For instance, a prism with a base situated at 125° provokes on the retina a deviation of the visual space approximately parallel to the retinal meridian «associated» to the plane of the right posterior canal (fig. 3). 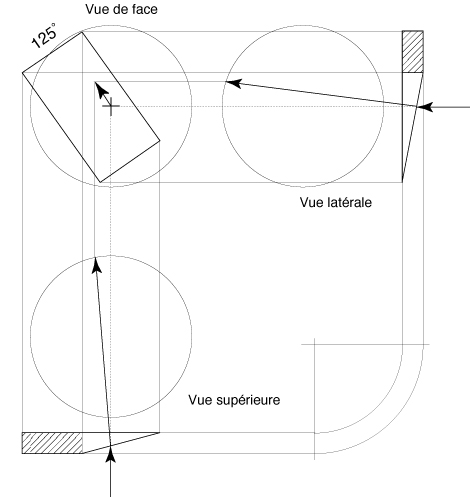 .     The apparent movement of the environment image on the retina of the right eye corresponds to the movement of the eyeball, close to the primary position, produced by the action of the obliquus inferior muscle.
.     In order to check that this relation between the planes of the canals and the position of the base of the prism can be found again experimentally, a retrospective study has been undertaken on the files of postural patients of the Institut de Posturologie treated by the wearing of optical prisms.

Subjects
.     The files of 197 patients who had been attended at the Institut de Posturologie for symptoms related to functional disorders of the control of the orthostatic posture, have been selected because they contained precise reports of normalised postural clinical examinations (Gagey, 1993) all those patients had undergone. Those files notably contained numbered evaluations of postural tonus, with and without an optical prism of which the position of the base was known.
.     Those patients either complained of vertigo sensations and/or instability, without anomalies in the vestibular functional tests, or of various pains in the corporal axis in orthostatism (lumbar pains, cervical pains, etc.).

Evaluation of postural tonus
.     The numbered evaluation of postural tonus selected for this study is the spin movement observed during the stepping test of Fukuda-Unterberger (Fukuda, 1959). That spin parameter has been studied in a population of normal subjects; we know the distribution of its random fluctuations between two tests performed in similar conditions at a few minutes or a few weeks interval: the mean of matching differences between two similar tests is of 0° ± 25° (Weber et al., 1984). The performance conditions of the stepping test described by Gagey & Weber (1995) have been respected in the population of patients studied.
We know that changes in the symmetry of postural tonus involve systematic changes in the spin movement during the stepping test (Fukuda, 1959; Ushio et al., 1976). 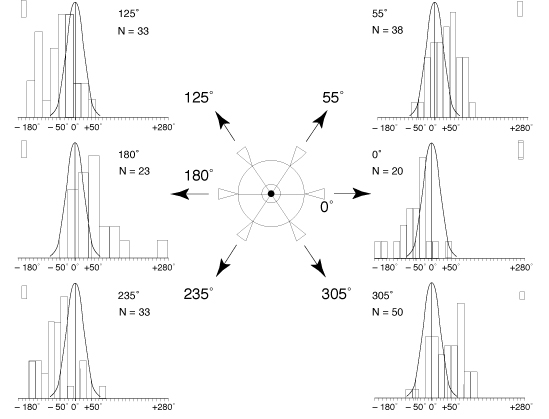 .     The reported clinical facts do not allow proving that the perception of space, during the ontogenesis, is organised in a coherent way between the visual and vestibular sensory canals, yet they certainly make that hypothesis even more probable.