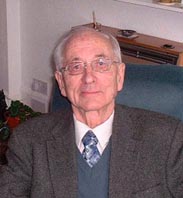 
Ackoledgments to Mr Philip Copestake for the English translation

I first met Geoff Walsh 30 years ago. I was then a callow undergraduate student of Physiology at Edinburgh. At this time I first entered the rather gloomy basement which housed the Human Neurophysiology Lab and the intriguingly named Special Senses Lab which were presided over by Dr EG Walsh and his technician Mr G Wright (no first name status in these days). The labs and his office were very often home to Geoff’s Dalmatian dog, Tasha. Experimental classes for students were overseen by the two gentlemen. For these teaching sessions, Geoff would often wear his off-white labcoat which resembled, and might well have been, a nightgown of the Victorian period. Centre stage was occupied by a huge parallelogram action see-saw by which recumbent subjects could be propelled through a distance of a couple of metres towards the ceiling or floor. This apparatus had been built in order to test the vestibular sensitivity to linear acceleration in the saggital plane1. These experiments, and others involving rotational vestibular stimulation were naturally popular with students who competed to achieve the highest velocities. Some years earlier there had been another apparatus that measured vestibular sensitivity in the transverse direction. To reduce shear forces on the skin the supine subject (breathing through a mouthpiece and valve) was entirely immersed in a deep coffin shaped tank of water suspended from the ceiling. In action, the water would slosh about and to minimise this disturbance it was rendered more viscous by the judicious admixture of wallpaper paste and sawdust. The subjects indicated that they had detected the stimulus by tapping with a hammer on the floor of the tank. Their reaction to the procedure is not reported2.

I remember at the time being impressed equally by the ingenious nature of the experiments and by the discovery that most of the apparatus had been cleverly constructed from a combination of vehicle, aircraft and marine scrap. There was, as I later discovered, an even deeper basement packed with gleanings from scrapyards and surplus stores. Geoff's main early interests had been the sensory nervous system and he had an impressive number of publications on this work under his belt and his erudite, entertaining and eclectic book (The Physiology of the Nervous System3) enjoyed a wide readership. Working with Horace Barlow he had published two papers in 1947 on electrical and magnetic stimulation of the visual cortex 4,5. Half a century later Magstim experiments are now much in vogue. There was an early paper in Nature with Heinz Wolff 6 on the design of a novel beam splitting spectrophotometer. There were many papers on various aspects of vestibular sensation in animals and man. From this basis, his attention had broadened to encompass standing and balancing mechanisms, postural stability and instability and in particular, tremor.

I subsequently came to know Geoff well as I did a PhD under his supervision and worked with him as a postdoc for a number of years and we kept in touch thereafter. His industry, intelligence and enthusiasm were formidable and a little frightening at first. Fortunately these characteristics were offset by a delightful sense of humour which was without doubt the driest that I have ever encountered. Although possessed of a dry sense of humour there was nothing arid about the man who had the most genuine curiosity about, and interest in, all aspects of life. He was in the true sense of the word a polymath. He once declared that it was his ambition to understand all scientific subjects to at least first year undergraduate degree level. As well as working hard in his spare time to achieve this ambition he also painted and played the flute. He was to some extent an iconoclast who cared little for uninformed opinion. It is hard perhaps to remember a time before the ubiquitous Walkman clamped over the ears became a commonplace. Many years ago I watched Geoff waiting in a busy public area of the Western General Hospital in Edinburgh as we whiled away the time before starting an experiment. He had over his ears a large pair of bright red earphones. Between the earphones was a centrally mounted radio receiver and a short vertical whip antenna sprouted from his head. The strains of Radio 3 were just audible. He gave every appearance of being oblivious to the interest that he was creating.

Although he was a scholar who loved to read and to write it is for his experimental work that he will be remembered. He was an enthusiastic radio amateur and a very skilled builder of electronic apparatus, often of a high degree of complexity. The seamless transition from valves to transistors to integrated circuits and latterly to computers cannot have been easy to make. His electronic design ability was remarkable and he built a great number of novel circuits to carry out often complex analogue processes. While the design was invariably excellent, the standard of construction was often less perfect. Experiments would sometimes be punctuated by flashes, bangs and blue smoke as wires made accidental contact. On one memorable occasion a Physiological Society demonstration very nearly came to grief when widespread short-circuiting was found to have occurred because several of the rubber bands holding the circuit boards in place had perished. Such a technical malfunction would invariably trigger a reaction resembling that of a parent exasperated by a non-cooperating child. There would be an initial astonishment at the unexpected event, followed by a period of tutting and mild irritation as repairs were effected. This was characteristic; although an individual of very strongly held beliefs and principles he never publicly expressed more than a puzzlement and irritation at life's tribulations. He was interested in travel and transport. Well known in Edinburgh was the steam car that he had designed and built although when I first knew him he generally travelled by motor-bike. There was a spare crash helmet and would sometimes offer the unwary or naïve a lift on the pillion seat. With a group of researchers he measured head oscillations of volunteer railway passengers in a train consisting of different models of carriage 7. This train was specially run for the purposes of measurement on the East Coast line between Edinburgh and Newcastle. (He was particularly fond of the account of this work that appeared in The Times under the neat caption "Heads roll on the 09.45"). He investigated in person the motion sickness caused by the effect of swaying gait of camels.

It is perhaps difficult to say what his main scientific interest was, but I would judge that his research always centred on recording and measurement, usually employing some highly original technique and self-constructed apparatus. If Geoff’s research programme was perhaps less focussed and more curiosity-lead than would be generally approved of nowadays he nevertheless pursued important and complicated problems. Working sometimes on his own, but more commonly with a small number of colleagues, he made and is remembered for fundamental discoveries in four important areas.

First 8, there was his suggestion very nearly 50 years ago that physiological tremor represents in the main filtered noise which is generated by random motor unit activity. To this might be added the subsequent demonstration that it is the resonant properties of the limbs that imparts a colouration to the noise and gives it the appearance of a tuned oscillation. He was dismissive of "tremor generators"
Second 9, he was one of the first investigators to investigate the entrainment of pathological tremors using torque motors to "drive" a limb. This ingenious approach can in principle distinguish between an oscillator which is autonomous and one which results from a process of self-re-excitation by a feedback mechanism. However, the resulting analysis is fraught with difficulties.
Third 10, he was the first person to employ positive velocity feedback (negative damping) in order to make the human musculoskeletal system unstable and resonant. This technique has been recently used to study the operation of the CNS controller. Finally 11, following some pioneering work on the measurement of human muscle tone, he was able to demonstrate that human muscles behaved thixotropically, that is they had a stiffness which depended not just on the size of a movement but also on their history of movement. The implications that thixotropy has for the control of movement and the cause of the phenomenon are subjects which are currently receiving widespread attention.

Geoff maintained an active interest in research beyond retirement. He wrote his second book and finished a draft of a third. He had a laboratory built in his garden and he vigorously pursued the study of skilled finger movements in musicians and others. His findings were published on a regular basis right up to the time of his death. The possessor of an excellent memory, he was a fascinating source of recondite information on many aspects of Neurophysiology right up to the end of his life.

He was a colourful inhabitant of an earlier more colourful world. A world where the scope of scientific investigation was usually limited by the apparatus that could be constructed and the skill and intelligence of the investigator rather than by the size of the research grant that could be obtained. A world where intended learning outcomes, research assessment exercises, cost centres and teaching quality audit did not exist, yet good research was done and students were taught well. He once told me that he loved his job because he was paid for doing what he enjoyed most. That made him an amateur in the best sense of the word. Neurophysiology has lost one of its pioneers and the world is a greyer place for his death.